Even growing up in Champaign, Illinois, a few miles from two of the largest RC companies, Joe Burch never guessed he’d be involved in the RC industry.

While majoring in Electrical Engineering at the University of Illinois and the University of Michigan, Joe focused on Control Systems and Artificial Intelligence. After school, Joe worked for an Aerospace company in Arizona as a Guidance, Navigation and Controls Engineer. He developed orbital trajectories, autopilots, and guidance algorithms for launching satellites on decommissioned ICBMs. 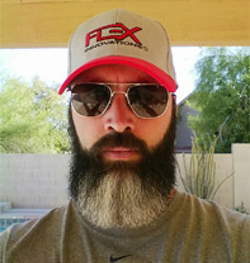 After seeing an Aerospace Controls job posting back in his hometown, he applied for and accepted a job as the first and only Electrical Controls Engineer in the Aircraft division for Horizon Hobby. Back home in Illinois, Joe began his RC education working with David and Quique. Joe developed the controls and electronics for the first generation of SAFE aircraft including the Apprentice SAFE, Delta Ray, and Super Cub SAFE. Joe also worked to develop the E-Flite UMXtra, AR636, and other aircraft with the help of the David, Quique and all the other talented R/C developers at Horizon Hobby.

After a few years, Joe began to miss the sunshine of the desert. After moving back to Arizona, Joe became involved teaching electronics at a local makerspace and consulted on projects such as wearables, full-scale 4×4 FPV ground vehicles, and autonomous vehicles.

After connecting with David and Quique again, Joe has focused his development efforts on the Aura Advanced Flight Controller (AFCS). Developing the code, PCBs and configuration tools for the Aura gives the Flex Innovations team an advanced, proprietary and flexible rate gyro and flight controller for any brand of receiver. He continues to explore and develop Flex Innovations electronics and control systems.